With advances in medical science driving progress against childhood brain tumors, today three out of four young patients survive at least five years beyond diagnosis. However, the outcomes look grim when malignant cells spread, or metastasize.

Such is the case with medulloblastoma, a type of brain cancer that arises in the cerebellum, at the back of the head. Although rare in absolute terms — about 350 cases emerge each year, 60 percent of them in children — medulloblastoma is the most common and deadliest form of pediatric brain cancer. Metastasis to the lining of the brain or spinal cord is responsible for virtually all deaths from the disease.

Now, research led by USC investigators has shined new light on how medulloblastoma travels to other sites within the central nervous system. The study, which appeared in the journal Cell Reports, showed that an enzyme called GABA transaminase, abbreviated as ABAT, aids metastases in surviving the hostile environment around the brain and spinal cord and in resisting treatment. These findings may provide clues to new strategies for targeting deadly medulloblastoma metastases.

“This is one of the first studies to focus on how medulloblastoma spreads through the perspective of neuroscience,” said corresponding author Josh Neman, PhD, an assistant professor of neurosurgery and the scientific director of the USC Brain Tumor Center at the Keck School of Medicine of USC and a member of USC Norris Comprehensive Cancer Center. “These tumors are not only smart, but also utilize any means to grow. Now we know one key marker that the rogue cells use.”

Medulloblastoma faces a substantial challenge in spreading to other parts of the central nervous system. The cerebrospinal fluid that fills cavities inside the brain, as well as surrounding the brain and spinal cord, lacks nutrients for cancer cells to feed upon.

Medulloblastoma faces a substantial challenge in spreading to other parts of the central nervous system. The cerebrospinal fluid that fills cavities inside the brain, as well as surrounding the brain and spinal cord, lacks nutrients for cancer cells to feed upon.

For what cerebrospinal fluid lacks in nutrients, it makes up in an abundance of an amino acid called GABA. GABA’s primary purpose in the central nervous system is as a neurotransmitter that lessens the effects of other messenger molecules in the brain and spine. However, healthy neurons in the cerebellum also break GABA down for energy. The ABAT enzyme helps in the process.

The study led by Neman, his doctoral student Vahan Martirosian and their colleagues outlines how medulloblastoma metastases respond to the barren environment in cerebrospinal fluid by changing up their metabolism. The scientists showed that cells at the primary tumor site are low in ABAT compared to their neighbors in the brain, while traveling medulloblastoma cells are significantly higher in ABAT. The metastases avoid starvation by ramping up production of the ABAT enzyme so they can feed on GABA, in a sort of microscopic cloak-and-dagger exercise with deadly consequences . 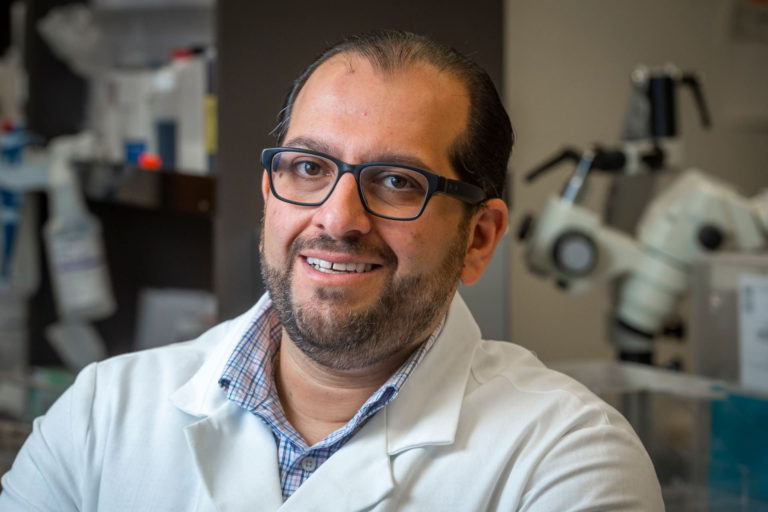 Another effect of ABAT is to slow cell division. This turns out to be an advantage for the medulloblastoma metastases — ironically, considering that cancer is characterized by out-of-control growth. Because radiotherapy and chemotherapy affect the fastest-growing cells in the body, increased ABAT helps the metastases go undercover and resist treatment.

“When tumor cells go quiet, they’re very dangerous,” Neman said. “Current therapies don’t work perfectly on these quiet cancer cells — and that is why they ultimately survive and spread.”

Indeed, the researchers showed that ABAT-rich tumor cells were more resistant to cisplatin and vincristine, types of chemotherapy commonly used to treat medulloblastoma. And medulloblastoma cells were unable to spread to the linings of the brain and spine without ABAT.

A key comparison between cancerous and healthy brain cells

The Cell Reports study documents a chain of diligent investigations in which each answer led to an additional question that the researchers pursued. The paper reports on more than three dozen individual experiments designed to understand the metabolism, survival and proliferation of medulloblastoma cells. The scientists’ methods ran the gamut from analyzing DNA and RNA datasets to studying the metabolism of cells grown in culture, from working with genetically engineered lab models to examining tumor samples donated by patients.

According to Neman, one particularly powerful tool his team used to understand the spread of medulloblastoma was the side-by-side comparison of cancerous cells with healthy brain cells of various types. In certain ways, the slow-growing metastases seemed to ape processes seen in neurons — cells that do not divide and reproduce.

“Our approach was utilizing the emerging field called cancer neuroscience, where normal developmental neurobiology meets cancer biology,” he said. “The ultimate quiet cell in the body is the neuron, and these cancer cells are using similar pathways to become rogue and survive.”

As next steps in this line of inquiry, Neman is leading preclinical studies to test whether drugs that inhibit ABAT will halt medulloblastoma metastases. Meanwhile, his research group will delve into other elements of ABAT’s role in the disease.

“With neuronal comparison, we’re just hitting the tip of the iceberg,” he said. “There are many more features of these dormant tumor cells that we haven’t discovered yet.”

The study was supported by the American Brain Tumor Association (DG1600003), the National Institutes of Health (P30DK048522) and the Keck School’s Dean Pilot Project Grant.

Use Our Quick
Referral Form